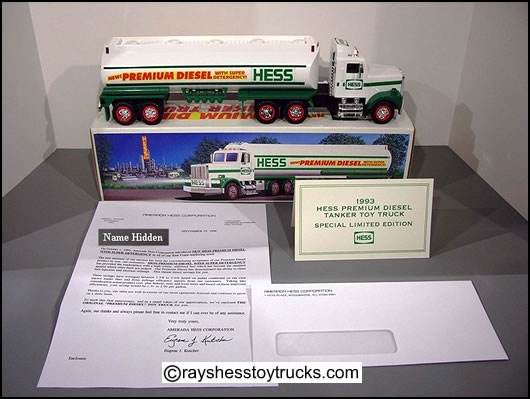 1993 Hess Premium Diesel
(not available to the Public)

On October 1, 1993 Hess introduced the “93 Hess Premium Diesel” with super detergent gasoline in all their gas stations on the East Coast marketing areas. Sales were so great the following year Hess sent out a gift with a letter to each bulk customer. The gift they received was a “Premium Diesel” Toy Truck. The trucks actually weren’t released until late 1994. Each truck came with a letter in an envelope and a thank you card from Hess. The truck was based upon the 1990 Tanker Truck. The Truck was also wrapped in green wrapping paper and included a Seasons Greetings card and letter. This is a highly sought truck by collectors as it is a very rare truck to find.

The box contains a picture of the truck with the Hess Refinery in the background.