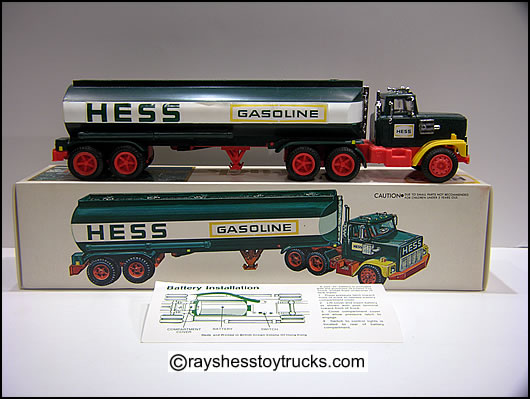 The box is a 4 sided panel style that has pictures of the truck on both sides and the front end on one end and the rear end on the other. The top of the box has the Hess logo, writing that says “Toy Truck” and a picture of a Hess gas station. Another piece of information that people do not seem to notice is that on the end of the box that shows the rear of the truck it says “Made in Hong Kong, Amerada Hess Corporation, Woodridge New Jersey 07095. Nobody seems to notice that the word “Woodbridge ” on the box is missing the “b”. Beware, some people try to sell this as a “Special Edition” but all the 1977 & 1978 boxes were misprinted.