The truck is a newly designed cab and box trailer. It comes with three small oil barrels with no labels.  Note the unique sliding doors on each side of the trailer, rear doors that open and close, and working headlights and taillights operated by a switch underneath the trailer. This truck had a one-piece cab. (The cab and fenders are one piece.) This is the first non-split window truck in the Hess line. Also, the 1975 Box Truck was made of a lighter color green plastic than the 1976.

There were 4 versions of the 1975 Hess Truck which can be seen on the front part of the trucks trailer and underneath.

On the versions with the large writing underneath the trailer part of the truck you will notice that the “O” is missing in CORPORATION. This design was purposely done due to lack of space (see pic).

Just recently found on the front end of the trailer are what can be described as 2 small inverted “candy canes (see pic below).

Also just recently found on the front end of the trailer are what can be described as looking like two #7s (see pic below). 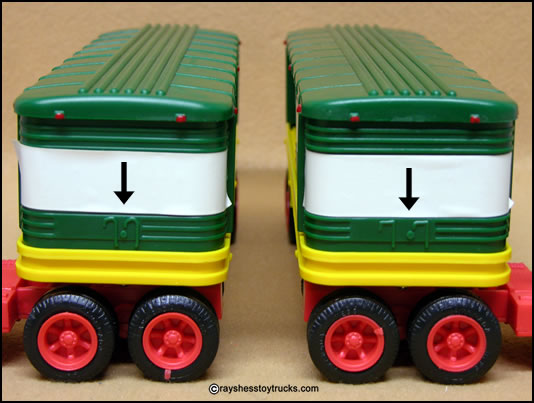 The most significant variation of the 1975 Hess truck was “Made in the USA.”

This rare truck was actually the first run produced in the USA by the Marx Toy Company in Glen Dale VA. The 1975 Hess truck actually started to be designed in 1972. This is not odd as all of the Hess trucks take years to design. There are several differences in this truck from the common trucks that were made in Hong Kong. Here are the differences between the two:

Here are some pictures of this gem that are rarely seen!